From Paris to Provence: French Art, Artisanry and Architecture 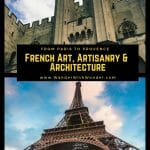 Think of les belles artes and France immediately comes to mind. In this land of Napoleon and Eiffel Tower fame, the French have given humanity a wealth of treasures, from fine art and fabulous artisanry to grandiose architectural feats. Not that they necessarily have a global monopoly on creativity, but their beautiful works of art—from the subtle and sublime to the extravagant and extraordinary—are showcased so dramatically that tourists from around the world flock on a daily basis to witness their ostentation.

From the avenues of Paris to the lavender-fields of Provence, French artists, artisans, and architects have wowed us with their paintings and sculptures, their theatrics and craftsmanship, and the baroque remnants of their Roman and Neo-Classical past. Here are some of our favorite examples of French art, French artisanry, and French architecture.

Art, Artisanry, and Architecture Around Paris

The best place to begin any peek at the art and architecture of France must begin in the country's capital city. Paris is filled with great examples of how art, artisanry, and architecture define a culture. Here are a few of my favorite examples in Paris.

Appreciate the talents of famous artists at the Louvre—like Da Vinci's renowned Mona Lisa smile or Michelangelo's Venus de Milo. Admire the steel-and-glass pyramid designed by I.M. Pei, a Chinese-American architect, who effectively created a singularly-marvelous, as well as functionally-appropriate, entrance to the museum. The pyramid is an ingress to aid in dispersing the thousands of daily visitors into the spacious lobby and on to the various levels inside the Louvre. 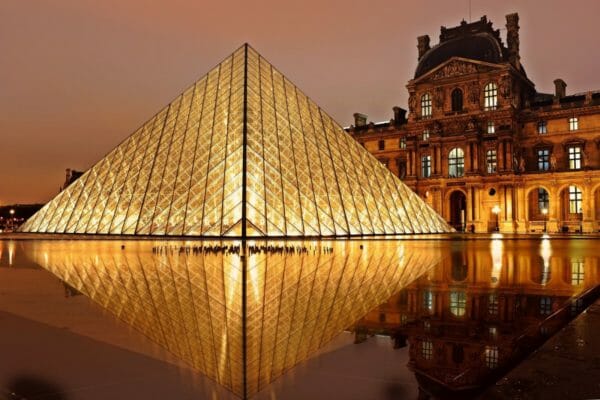 The Louvre. Photo by Edi Nugraha via Pixabay.

Take in the Wonder of l'Arc de Triomphe

Stand underneath l’Arc de Triomphe, by the eternal flame at the Tomb of the Unknown Soldier, and marvel at the bas-reliefs chiseled in magnificent detail across its stone façade. Commissioned by Napoleon himself to champion the French military machine, it was discontinued after his defeat; in 1833, Blouet began work anew and finished the arch. Cortot’s relief—The Triumph of Napoleon—depicting the monarch with a foreign entity surrendering at his feet, still graces the left face of the famed Arc, on the Champs-Élysées side. 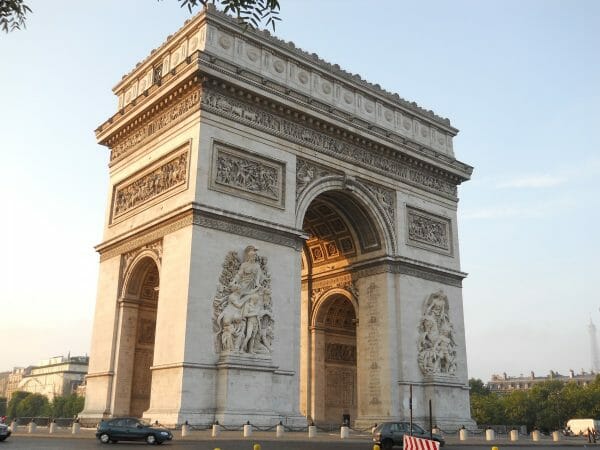 Applaud the wizardry of Gustave Eiffel, with his timeless rendition of metal-and-air that is perhaps the most iconic landmark on the planet. At the time of its construction, the Eiffel Tower held the moniker of the tallest man-made structure in the world, even taller than the Washington Monument. The Eiffel Tower held that status for 41 years until finally usurped by New York City’s Chrysler Building.  No matter though, it still holds the record for the most visitors of any paid monument on the planet.  Ride the elevator if you must, climb the stairs if you dare. 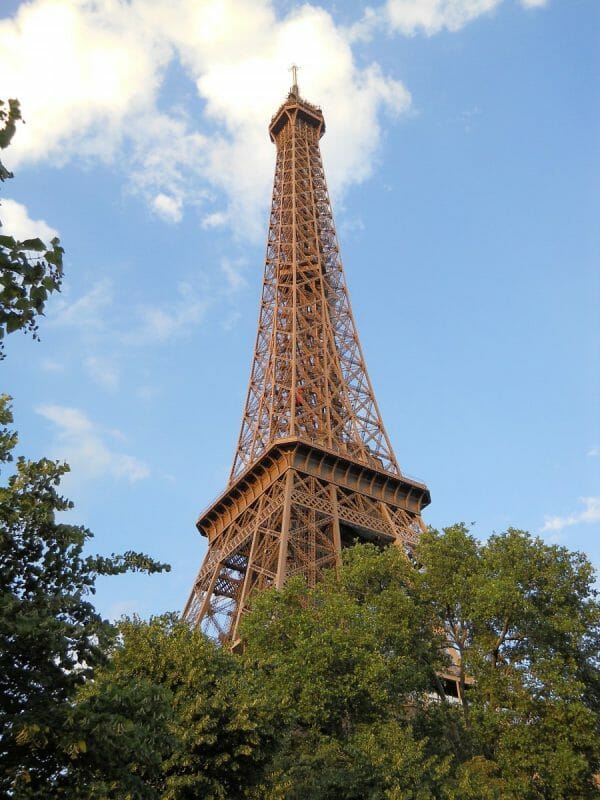 Commission a Caricature in the Montmartre District

Have your picture drawn for posterity by the skilled caricature vendors of Montmartre. True to the tradition of the Belle Époque (1872-1914), these artists work in the 18th Arrondissement, the same district where many of the most respected painters had studios—Monet, Renoir, Degas, Picasso, and Van Gogh. 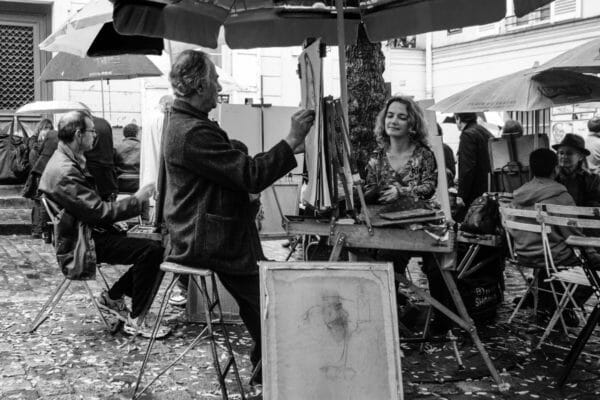 Caricature painters in the Montmartre District of Paris. Photo by bogitw on Pixabay

Ascend the spiral staircases of Notre Dame and laugh at the hideously-shaped gargoyles, architectural waterspouts added during the 1843-1864 restoration by Viollet-le-Duc. They were intended to prevent rainwater from draining down and eroding the cathedral. 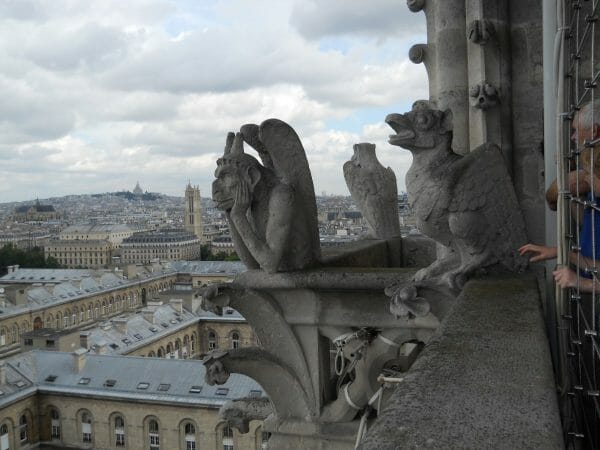 Gargoyles and Chimera on Notre Dame in Paris. Photo by Vickie Lillo

Equally frightening are the 54 chimera carvings, guardian demons, suspended from the balconies and parapets, designed perhaps to warn the citizenry to be on guard, that evil spirits lurk even near the church. For those brave enough to venture to the rooftop, past the most famous of the grotesques—le Stryge (the Vampire)—you’ll have a fantastic birds-eye-view of Parisian street life. 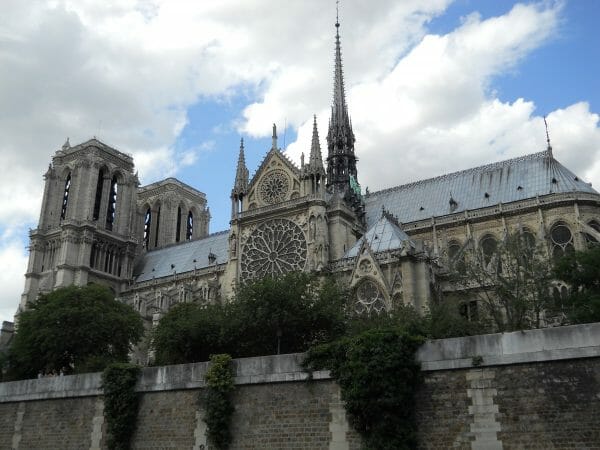 Cross the River Seine on the Pont d'Alexandre III Bridge

Photograph the ornamental cherubs, nymphs, and Art Nouveau-style streetlamps on the Pont d’Alexandre III bridge spanning the River Seine. Stand next to the winged horses at either end of this deck arch bridge, a French Monument Historique since 1975. It was engineered to pay tribute to Russia’s Tsar Alexander III, who was responsible for the 1892 Franco-Russian Alliance. 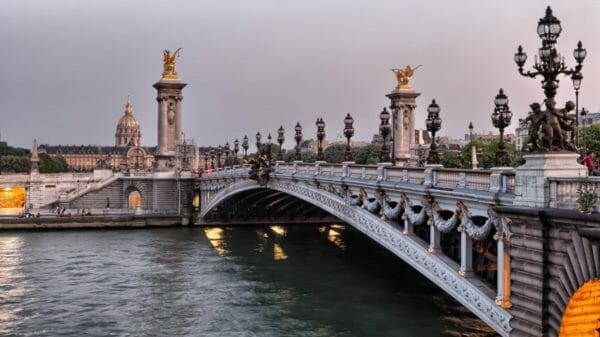 Walk into a Fairytale at Versailles

Be overwhelmed by an explosion of crystal chandeliers, gilded statuary, and unequaled opulence as you stroll through the Palace of Versailles’ famous Hall of mirrors. Seventeen grandiose archways of glass that overlook the scrupulously-manicured gardens are reflected in the same number of opposing arches consisting of 357 mirrored sections. 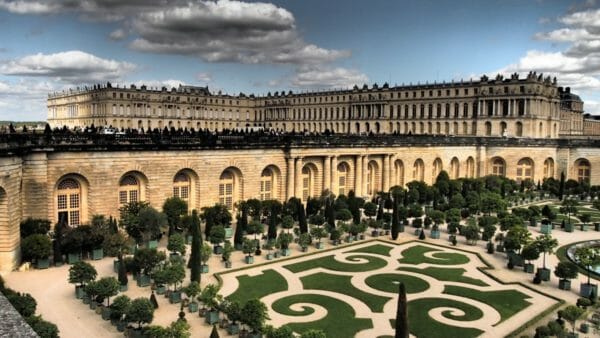 Palace of Versailles near Paris. Image by ahundt on Pixabay

Art, Artisans, and Architecture in Lyon

Witness the artisanship of Frédéric-Auguste Bartholdi—the creator of Liberty Enlightening the World, aka the United States’ Statue of Liberty—with his fountain of lead in the Square at Terreaux. It depicts a woman—symbolizing France—driving a chariot of galloping steeds, each representing one of the four main rivers of the country. He won a contest with this artistic endeavor at the young age of 23. 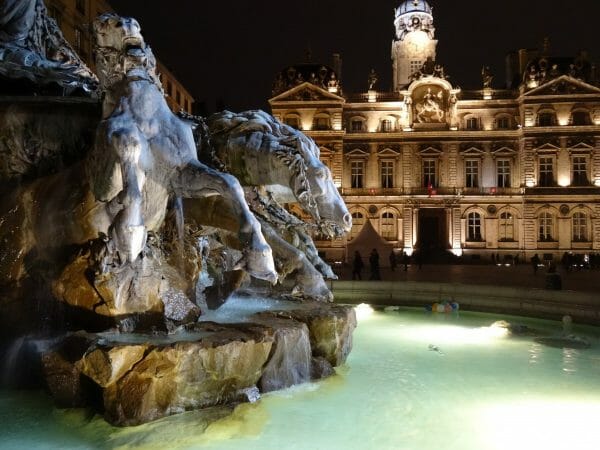 Bartholdi Fountains in Lyon. Image by bertomic on Pixabay

Relish the melding of two styles of architecture—Romanesque and Byzantine—at the UNESCO World Heritage Site at the Basilique de Notre Dame de Fourvière, situated atop a knoll high above the city. Be among the 2 million visitors who come to applaud the view, appreciate the exquisite stained-glass windows and mosaics of the interior, and pray to the Virgin Mary whom, locals believe, has saved the city from the ravages of the Black Death and cholera, and prevented the 1870 Prussian Invasion. Every year, on December 8th, the city celebrates Mary with a Festival of Lights by illuminating candles all around town in her honor. 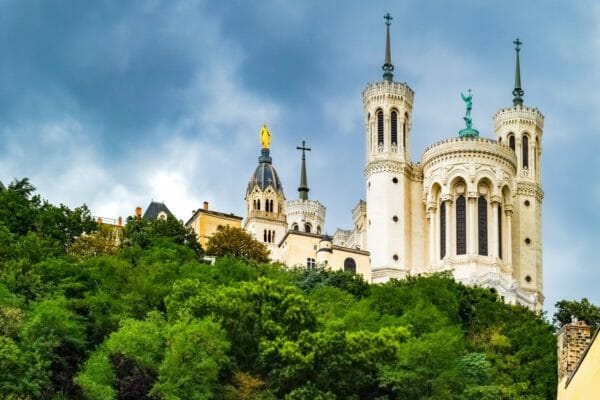 Art, Artisans, and Architecture in Avignon

Avignon is a medieval city in the heart of France's Provence region. It was home to seven popes in the 14th-century and is now a bustling town on the banks of the Rhône River. 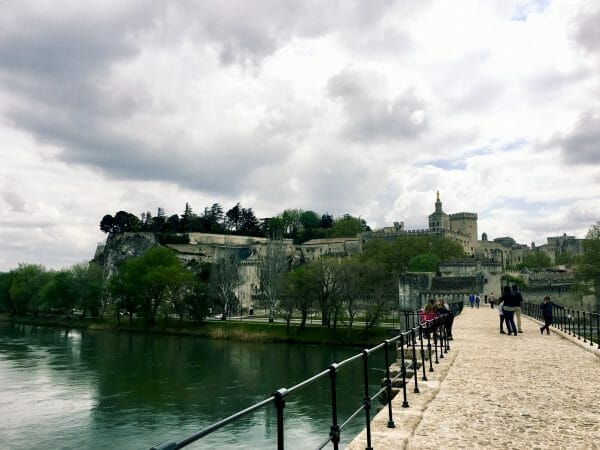 The Pont d'Avignon is one of the most visited and famous bridges in the world. Photo by Susan Lanier-Graham

Attend the festival of Avignon every summer. Enjoy its talented pantomime artists, costumed street actors and lively jesters cavorting alongside marching bands thrumming their tambours. For three weeks in July, take the opportunity to watch one of their riveting plays. Colorful artsy placards—theatre production advertisements—adorn every storefront, kiosk, and ounce of available building space in town. 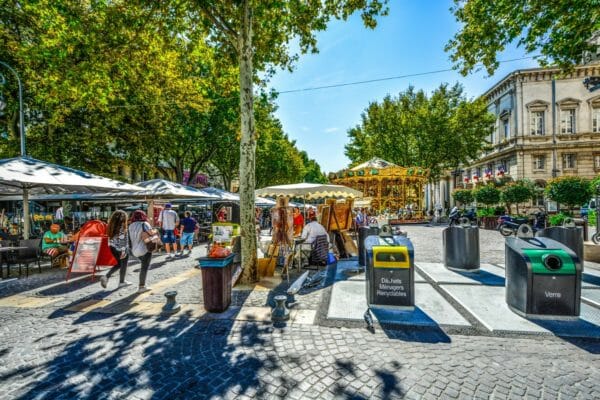 Avignon in summer. Image by kirkandmimi on Pixabay

Duck inside the cloisters of the Palais des Papes (Papal Palace), the medieval Gothic castle that housed seven successive popes in the 1300s. A veritable fortress against invaders and plagues of pestilence, the once-lavish Papal court, now a UNESCO World Heritage site, has fallen into ruin after centuries of sieges and innumerable military occupations. It is now in a constant state of being restored. 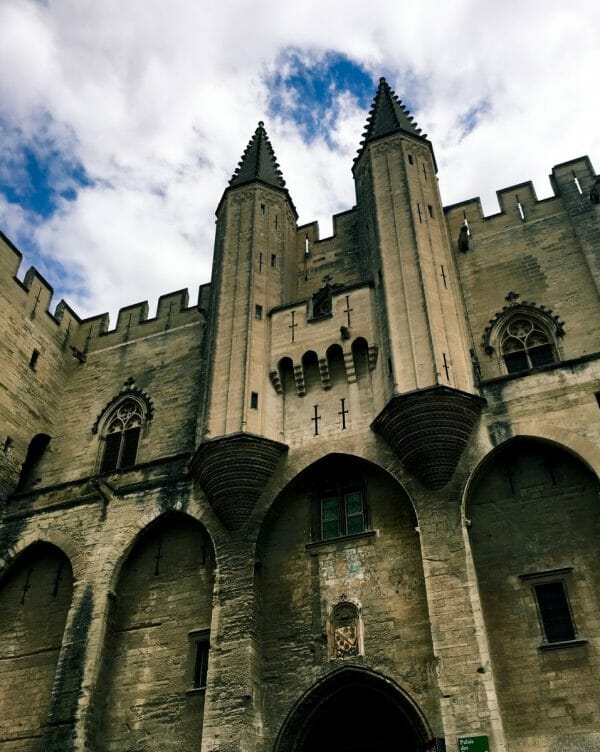 Be sure to visit the nearby Pont du Gard Aqueduct. Also a UNESCO World Heritage site, it is a beautiful remnant of an ancient Roman creation. It stands just under 160 feet high (about 48 meters) and is almost 900 feet long across the Gardon River. Constructed in the 6th-century, you can still walk across the aqueduct. There are beautiful walking trails and an informative museum. 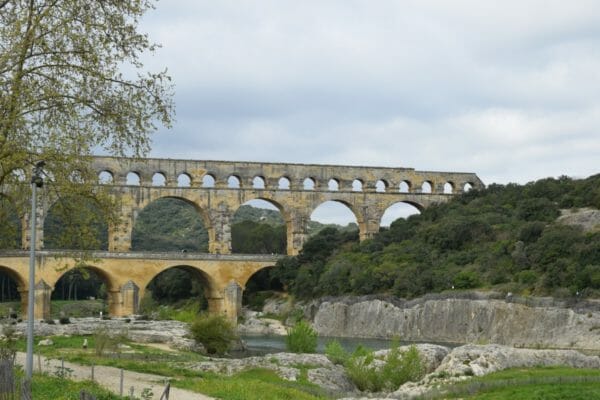 The Pont du Gard near Avignon dates to the 6th century. Photo by Susan Lanier-Graham

We hope you have enjoyed this exploration of the art and architecture of France. There's so much more, great wow moments, awaiting at every turn. Be sure to read more on Wander about our favorite things to do when you Wander France.

Vickie Lillo is a Florida-based freelance travel, birding, and reptile writer. She is also a stringer for the local Gadco Times and Calhoun/Liberty Journal weekly newspapers. She enjoys globetrotting with her husband Gustavo, and now that her son Nicolas has left the nest, is glad to have given him the gift of the love for travel. 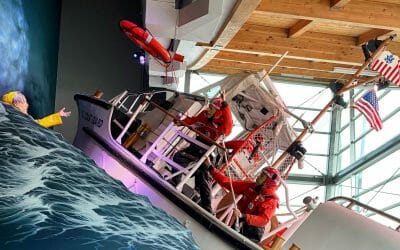