Italian winemaking families typically involve a legacy of generations, an inherent passion for wine and insatiable love of the land where they grew up. Today many of these families are spreading their influence to encompass different wine regions. This expansion often includes creating either a resort or a unique destination for wine enthusiasts to enjoy. Such was the case when I visited Azienda Agricola Livon representing three distinct wineries—Livon in Collio, Borgo Salcetino in Tuscany and ColSanto in Umbria.

The current Livon story started in 1964 when Dorino Livon’s dream came to fruition in his homeland of Friuli. Dorino sold lumber to buy his first piece of property. This region, which includes Collio and Colli Orientali del Fruili, lies in northeastern Italy. At the time, this area was not well known, but was a gamble that paid off.

View of Collio from Livon. Photo by Cori Solomon

By the 1970s, Dorino’s sons, Valneo and Tonino, played roles in the winery's production. Starting in the 1980s their impact brought the winery forward. They chose to produce more limited quantities of their Cru wines by picking the most suitable vineyards to exemplify these wines. They also accomplished this through the reduction of grape quantity per hectare, shorter pruning and planting more densely. These changes have been incorporated into all their wineries.

In addition, they created two distinct wine cellars for the Collio wine. The “Masarotte” wine cellar handles all the Cru production while “Vencò” wine cellar manages all other white wines.

Valneo and Tonino decided to expand the winery into other well known wine producing areas. Between 1992 and 1997, the Livons purchased three farms—Villa Chiopris and Tenuta Roncalto in Friuli Venezia Giulia and Borgo Salcetino in the Chianti Classico region of Tuscany.

In 2001 the winery had another growth spurt when the family purchased ColSanto in Perugia, Umbria, located in the heart of the Montefalco DOCG.

The Vineyards of ColSanto. Photo by Cori Solomon

Today Matteo Livon, Valneo’s son, plays an active role in continuing the winery's legacy.  Matteo represents the third generation and will one day preside at the helm.

As an artist and a lover of Art Deco and Erté, I was enthralled to discover Livon’s label and branding. The Livons also seemed enchanted with the work of Erté. They received permission in 1992 to invert Erté’s winged woman that symbolizes the number five, allowing the figure to resemble the C of Collio.

According to rumor, there was some international outcry when US customs agents blocked delivery of the bottles. They deemed the winged woman pornographic because of her bare breasts. The publicity caused customs to reinstate the delivery and helped put Livon on the map in the US.

In 2014, to celebrate Livon’s 50th Anniversary and their new Cru line, they reversed the winged woman back to signify the five and added a zero.

Collio means hills in Italian. These hills eventually become the slopes of both the Dolomites and the Julian Alps. This crescent shaped region lies between Austria and Slovenia, along the Adriatic Sea. The area is influenced by both the warm currents of the sea to the south and protected by the cool mountain breezes of the Julian Alps to the north.

The soil—Ponca—is composed of stratified Marl and sandstone.  This type of soil gives the wines their minerality and salinity.  The soil composition and Collio’s proximity to the Adriatic Sea delivers an expressed character to the wine.

Coincidentally, the same year Dorino established his winery—1964—Collio became one of the first in Italy to create a wine association known as the consortium.  In this case the Consorzio Tutela Vini del Collio.  By 1968 the area received its DOC designation as Collio Goriziano or Collio for short.  Finally, in 2010 two consortiums united to form the Consorzio Tutela Vini Collio e Carso.

Livon is made up of several properties, Villa Chiopris, the winery, the Masarotte Wine Cellar and of course the vineyards on the slopes of Collio.

The wines produced here represent both Collio and Colli Orientali del Fruili. Although I was unable to sampled them all, Livon's portfolio is quite extensive. The wines under the Livon Collio label include Friulano, Sauvignon Blanc, Pinot Grigio, Chardonnay and Pinot Bianco. Some of the Livon Cru wines are Manditocai, Soluna, Solarco, Braide Grande and Ribolla Gialla. Livon Gran Cru consists of Braide Alte, Cumins and Casali Godia.

Villa Chiopris is an ancient villa that the Livons remodeled into a charming Bed and Breakfast Inn.

Dining at Villa Chiopris with the Livons. Photo by Cori Solomon

The property features a pool and rustic dining room.

The rooms are spacious and comfortable. Think shabby chic meets old-world Italy and you have the décor of my comfy suite.

Highlights from Livon in Collio

My visit to Livon in Collio consisted of several exceptional moments. The first was a vertical tasting of the Braide Alte. Considered Livon’s flagship wine, it blends primarily Chardonnay with Sauvignon Blanc, Picolit and Moscato Giallo.

The concept combines Chardonnay—the most popular variety in the world—with Italy’s indigenous grapes. Braide means land of the family and Alte means high. In this case, the wine represents the most loved vineyard of the Livon family located in the hills of Collio.

Our vertical sampled Braide Alte from 2001, 2003, 2004, 2007 and 2014. I am always amazed to taste older white wines because one does not expect them to last as long as reds. I discovered this to just not be true, especially in Italy.

The second wow moment allowed me to savor a 1988 Pinot Bianco. Celebrating Valneo’s son, Matteo’s birthday, this special wine represents the year of Matteo’s birth. With a slight golden hue, the wine revealed aromas of apricot, nuts and honey and exhibited creamy, apricot and honey flavors.

Finally, Valneo creates his own form of balsamic vinegar called Balsamico. Valneo took us into his attic that stores the barrels for aging the vinegar. Much like the Solari method of creating sherry, the vinegar utilizes a similar process. This quick visit to the aging room made me appreciate balsamic vinegar even more. I have to say, Livon Balsamico is excellent.

Borgo Salcetino was founded in 1996 in Radda, which lies in the heart of Tuscany’s Chianti Classico region. There, you will find a charming stone winery typical of the Tuscan landscape. The Livons own 30 hectares, of which 15 are planted with grapes.

In accordance with the DOCG, the wine consists of 95% Sangiovese and 5% Canaiolo. Our visit included a vertical tasting of the Lucarello from 1996, 1997, 1999, 2000 and 2003. My favorites were the 1996 with its earth and dried herb aromas and elegant ripe flavors and the 2000, which had similar qualities to the 1996 but was bigger and displayed more structure and complexity.

During my visit, we feasted on the most delightful farm-style luncheon prepared by Dante Bernardis, a chef at the well-known Antica Macelleria Cecchini restaurant in Chianti.

Dante’s exuberance and charm made the sampling of the Livon wines equally enjoyable and the pairing superb. 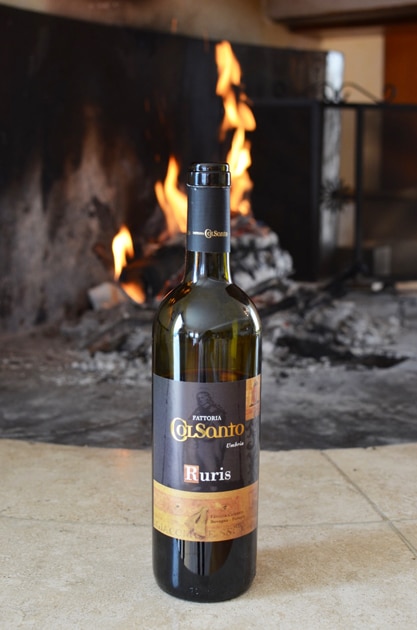 ColSanto sits on a hill with views of Assisi, Spello and Montefalco. Currently the 18th century farmhouse services the winery and wine tasting room on the lower level while the upper floor features a bed and breakfast that consists of a great room and six guest rooms.

The Livon family’s impact on Italy’s wine industry, especially in the Collio region, is profound. When I look back now, my visit only touched on a small sampling of what this family has accomplished in 50 years. I know I want to sample the wines I did not experience during my travels to Italy. The Livon family’s passion is contagious as it ignited the passion I have for wine, discovering the different regions of the world and sharing them through my written word.

Today’s #travelmemory is from a lovely April thr

I will be sharing some #travelmemories over the ne

Be safe and #shelterinplace during #covıd19 Take

I’ve been thinking a lot lately about boundaries