Discovering the Stylish Comfort of The Inn at Lynden in Washington

I recently stayed at the Inn at Lynden while visiting the little town of Lynden, Washington known for its Dutch heritage. The town experienced an influx of Dutch immigration in the early and mid-1900s.

History is full of tales, and in the Dutch-themed town of Lynden, Washington, the Waples Mercantile Building has become a caretaker of one of these tales. Originally called the Lynden Department Store, the building was built in 1914 by Billy Waples. Since 1897 he'd operated a general store, which kept growing and eventually became one of the most successful department stores in the Northwest.

The Inn at Lynden – Repurposed in Style

In 2015, this iconic landmark debuted a reimagined life as a multi-use building that includes restaurants, shops, a tap room and the boutique lodging The Inn at Lyden. As a guest of the Inn at Lynden, I discovered comfort, style, and history in the heart of downtown Lynden.

The Inn has many unusual touches that connect the property to its past. Photo by Lara Dunning

From the moment I stepped inside, the building's distinctive touches stood out, like the original 2 x 6 fir flooring and the massive wooden sliding door that I later learned was part of a large roof beam. In the lobby, heavy timber columns stretched all the way to the ceiling, and both the columns and the fir flooring continued throughout the entire ground level to its neighboring businesses Village Books and Paper Dreams, Avenue Bread, Drizzle Tasting Room and Restaurant, Overflow Taps, and Bellingham Baby Company.

The style, with warm wood tones, high ceilings, and large windows continued through the ground level, making it almost a seamless transition from one shop to the next.

Before checking-in I took a few moments to admire the lobby's open layout which had plenty of seating and soothing earthy tones, a fireplace to warm up on a chilly day, large paintings, and natural lighting. 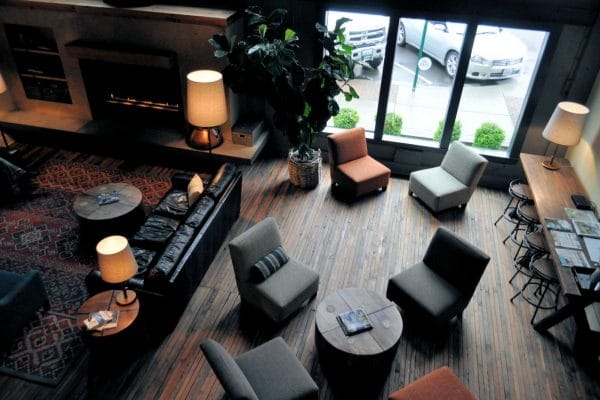 The lobby was created to be the heart of the building and to be a gathering hub for the community. Photo by Lara Dunning

Next to the check-in desk, I noticed a row of Dutch-style bicycles and decided I'd have to take one for a spin.

The Inn offers complimentary bikes for its guests. Photo by Lara Dunning

The Inn at Lynden – Luxury Rooms and Suites

I was delighted with the decor of my Deluxe Corner Suite, which had a mix of eclectic furnishings, plush comforters, soothing colors, and creative historical touches like exposed concrete walls and a photo of the building in the throes of construction.

The Inn is furnished with items from local businesses like Comphy sheets from Ferndale, WA. Photo courtesy The Inn at Lynden

The suite also included a huge bathroom, a wet bar with a refrigerator and microwave, a flat screen television, a dining table, a sitting area with a sleeper sofa, reading chairs, and a plush king bed.

Each room has a photograph of the building during construction. Photo by Lara Dunning

One of the amenities I really enjoyed was the suite's eight windows, which allowed for plenty of natural light and unobstructed views of downtown. Throughout my stay, I spent quite a bit of time gazing out the windows to the activity below. Across the street, the Lynden Dutch Bakery quickly captured my attention as there always seemed to be a regular line of people coming in and out. I decided I'd have to stop in to try one of their famous almond cookies – it didn't disappoint.

The Lynden Dutch Bakery is well-known for its baked goods, particularly its almond pastries. Photo by Lara Dunning

The Inn has a total of 35 rooms, with both queen, double queen, and king bed options. Room styles include standard, deluxe, suites and two extended stay suites. Plus, the inn offers complimentary parking, WiFi, and bicycles, which guests are encouraged to check out to tour the town.

Dining at The Mill by Perfectly Paired

I dined at The Mill by Perfectly Paired which features craft cocktails, specialty cheeses, fresh salads, flatbreads, paninis and house-made desserts. The restaurant is part of the Dutch Village Mall downtown and is actually housed in the Dutch windmill you'll see as you enter the business district. It's a short two-minute walk from the Inn. From start to finish, my meal was excellent.

For dinner, I started with the house salad, which came with avocado, sunflower seeds, creamy Caesar, yellow tomatoes and a parmesan crisp.

The house salad at The Mill. Photo by Lara Dunning

Being a lover of brie and pears, I ordered the Orchard Valley with shredded chicken, sliced pear, melted brie, arugula, and a sweet and savory sauce.

One of The Mill's specialties is paninis. Photo by Lara Dunning

I was very tempted by the dessert menu and debated between the Stuffed Turkish Figs and the Truffle Flight with three house-made truffles. I decided on the later and thoroughly enjoyed every silky smooth salty bite.

Not quite ready to retire for the evening, I stopped into Overflow Taps for a nightcap.

They serve around nine rotating selections of Pacific Northwest and California beers, including a handful of Washington ciders, wines, a hard seltzer, and non-alcoholic drinks like kombucha, root beer, and lemonade. As with the Inn, the tap room has wood tones, local art, and another unusual decoration, large yellow plastic water jugs. For every pint, be it beer or wine, twenty-five cents goes to charity for the global water crisis.

The Inn's complimentary bikes are an excellent way to tour the town. Photo by Lara Dunning

The next morning, I checked out a bike and with a map in hand, headed out to tour the town. Since it was early morning, navigating the streets was easy, and in around five-minutes, I found my way to the Lynden City Park to catch the trail that goes all the way to Bender Fields. The trail is very scenic with paths that meander through the woods, next to streams and cross over bridges. And, there is even a stone and thatched roof house right along the trail.

A local told I had to see the thatched roof stone house, which is right along the biking trail. Photo by Lara Dunning

There is plenty to do within walking distance of the Inn at Lynden. Be sure to stop by the Lynden Pioneer Museum, which gives an in-depth view into Lynden's history, including a main street that includes Billy Waples store, the Jansen Art center, which has art classes, studios, music, and art galleries, and The Claire Theatre, has annual productions. There are also many dining options like Dutch Mother's Bakery, JoFish Seafood and Grill, and a short drive away is Edaleen Diary Store, Steakhouse 9 and Bellewood Acres.

Lynden is a 27-minute drive from Bellingham, WA, a 1.45-hour drive from Seattle, and being 10 minutes from the Canadian border, it is an hour from Vancouver, BC.

For more information visit The Inn at Lynden or the Lynden Chamber of Commerce.

For another favorite #travelmemory we head to #bal

I want to start highlighting some of my favorite #

While we’re all #shelteringinplace sometimes we

Recipes from the Road: Great recipes to prepare at

Happy #easter everyone! Yep years ago I spent East