The Baja Mexico craft beer movement has exploded since 2010. Influenced by the beer capital of San Diego to the north, brewers are producing exciting Baja beers incorporating the flavors of Mexico. I was happy to discover Agua Mala Cervecería Artesanal, one of Baja’s best thriving microbreweries, during a recent press tour hosted by the Ministry of Tourism of Baja California.

Located in the small seaside town of El Sauzal just North of Ensenada, this pioneering, roadside gem was the first legal brewery to open in Ensenada. Owner/brewmaster Nathaniel Schmidt started out as a marine biologist. He moved to Ensenada from Mexico City to help establish the tuna hatcheries off the coast of Baja.

In 2009, Nathaniel started experimenting with homebrewing in his kitchen because of the lack of quality craft beer available at that time in Ensenada. After a valve exploded coating everything in a layer of muck, his wife kicked his enterprise out of the house. This incident motivated Nathaniel to find a facility and a partner—and start producing larger quantities of beer.

Fast forward to 2015 when the Agua Mala ocean view tasting room constructed out of recycled stacked shipping containers opened its doors. The use of repurposed materials reflects Nathaniel’s commitment to running an environmentally friendly business. He also implemented a recycling program reusing water and spent grains in the garden.

Nathaniel’s passion for all things ocean inspired him to name the brewery and all of the beers after elements of the sea. At first, I thought that Agua Mala (bad water) was an odd name for a brewery until I learned that it’s actually named after the venomous jellyfish endemic to the waters of Ensenada. 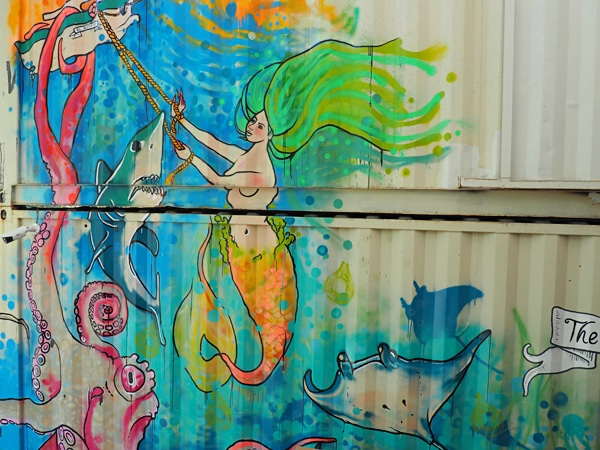 A small metal sign on a fence embellished with the signature jellyfish logo marks the entrance to this roadside microbrewery. Walk through the fence to discover the production area dominated by a vivid mural in fluorescent colors featuring a mermaid, shark, ray and octopus on the corrugated-metal wall.

When Agua Mala was awarded a silver medal for its Astillero (shipyard) IPA at the 2014 World Beer Cup, El Sauzal gained international attention. The copper-colored Astillero IPA boasts a whopping 8.5% ABV, floral aroma and clear bitter note characteristic of this style of beer.

To complement the exceptional beers, Michelin star chef Drew Deckman of Deckman’s En El Mogar (one of my favorite restaurants in the nearby Valle de Guadalupe) created a delectable food menu showcasing the fresh seafood and local produce of the region.

Choose from items such as oysters, ceviche, tacos, tostadas and sandwiches. I recommend the briny plump oysters in mignonette sauce that pair well with the Mantarraya.

Note: As is common in the travel industry, the writer was provided with tastings in compensation for the purpose of review. While it has not influenced this review, the writer believes in full disclosure of all potential conflicts of interest.