The running joke in my family is that everywhere I travel, a protest, revolt or revolution is sure to follow. I was in Bangkok, Thailand during a particularly large protest that took place and ended in several injuries and jail time (for others, not for me). I was in Egypt during the initial months of the Arab Spring. Even when I was in London there was a huge protest. Paris? Yep, the streets were shut down for a major protest. I even happened to be in San Antonio during an “armed protest” at the Alamo. Go figure–as my son said, “Only my mom would end up in another battle of the Alamo.”

View of Cairo from my hotel room. Photo: Susan Lanier-Graham

I really don’t plan my visits around citizen uprisings, but they’ve offered a lot of interesting experiences over the years. I will always remember what it was like to be in Cairo, trying to find the best routes back to the hotel to avoid the protestors or sitting in my room late at night, looking out over the city, and hearing the gun shots in the streets below me. It made me even more thankful to be an American.

There were both moments of humor (although it didn’t seem so funny at the time) and a couple of edgy moments that left me a little unnerved. I had ordered a couple of pieces of jewelry through my guide while on the Nile cruise (you can click here to read more about the cruise). When the boat docks in Luxor, my guide told me that my jewelry was ready and I needed cash. He met me on the dock and we took off through the streets of Luxor to the designated meeting location. It felt a little bit like a major drug deal as we hung out on the corner waiting for this mysterious friend. When he finally arrived, on the back of a motorcycle, I was warned that I should be “discreet” and give him my money. The man, wearing dark glasses, never said a word. He simply passed over little packets with my jewelry. Another instance where I was afraid I would end up in a foreign jail (you can click here to read about the day I stumbled into a counterfeit operation in Bangkok).

For most of my trip to Egypt, it was a little unnerving at times, but things headed into the “warning” zone when I headed out of Cairo to the Red Sea resort town of Hurghada. My guard during my time in Hurghada was a little creepy. He had a huge assault rifle that was clearly visible under his open coat. On my second day in Hurghada, I was supposed to take a trip out to the desert to visit a Bedouin camp. Myself and the other female journalist with me climbed into the back of a converted Hum-V. We stepped in and looked around. We caught each other’s eye as we realized the two of red-haired female American journalists found ourselves surrounded by a driver and armed guard in the front seat and three more men carrying various weapons sitting with us in the back. Headlines on CNN flashed before my eyes: Two American Journalists Disappear in Egypt. We informed our hosts that neither of us felt well and had a change of heart about heading out that day. Now, it may have been perfectly innocent, but that one instance where I was much happier to be safe than sorry.

Not all of my tour guides over the years have been armed, but an interesting assortment of them have left me shaking my head. One instance was during a walking culinary tour in a city that will remain unnamed. I love walking culinary tours because they offer a great way to explore a city, get to know the people and get a taste of the local foods. On this particular morning, however, things went from bad to worse. We were told to meet in the hotel lobby for our tour that would include breakfast. I was anticipating some great coffee, maybe pastries or waffles. Even some fruit.

Our first stop was at a hotdog stand, followed by a pasta maker. It was 8:30 a.m. and I just didn’t think I could bring myself to put a hotdog in my stomach to start the day, so I took a few nibbles to avoid looking completely rude. As we passed a neighborhood café, the smell of coffee wafted out the door. We all groaned and asked about grabbing a cup of coffee. Our guide responded by taking us to a local ginger ale manufacturer. By 9 a.m., I had hotdogs, pasta and ginger ale sitting in my stomach. No caffeine yet and the natives were getting restless–or, even worse, hungry non-caffeinated journalists were getting restless. Not a pretty sight. As we passed a bakery, the smell of baking bread beckoning us in, but we were rushed past the door to our last two stops. There, we were treated to cheese pretzels and sausage followed by bourbon-soaked bread pudding. Lesson: always carry a breakfast bar and have a cup of tea before leaving my hotel room. 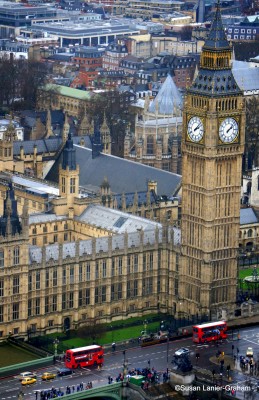 I think my favorite tour guide story was encountered on my first visit to London. I was thrilled to have a private tour of the city. The funniest little lady greeted me and ushered me to her car. It was cold out, so I was dressed for the weather. Unfortunately, she never let me out of the car. We approached Buckingham Palace. “Look fast,” she instructed me. “The traffic is bloody awful here.” We drove past so fast I could barely catch a glimpse. “Do you mind if we stop so I can take photos?” I queried. “No time. We have a deadline,” my tour Nazi snapped at me as she pointed up ahead.

“Look to your left up ahead. You’ll see the Globe Theatre.” We drove for three hours, dodging slower cars and camera-laden tourists who stood in our way. At precisely 1 p.m., she pulled up in front of an elegant restaurant. “Get out,” she snapped. “You’re having lunch here. We’re two minutes late.” I stepped out and turned to thank her as she reached over, pulled the door closed and sped away.

Some of my memorable travel misadventures have involved some interesting plane adventures. I likened my flight to Egypt on board Egypt Air as the in-air version of Kathleen Turner’s classic “bus to Cartagena” in Romancing the Stone. We might not have had live chickens, but it was definitely an adventure. From people walking up and down the aisles on takeoff and landing, to families enjoying picnics in the aisles, it was a classic adventure in travel.

I was also mildly entertained when I got into the 10-passenger plane in Livingstone, Zambia and the flight attendant walked up to me before we took off and pointed to a set of brightly illustrated instructions on the door across from me. Her seat was at the back of the tiny passenger compartment and if we had to make an emergency landing, I’d have to open the door. Of course, the seats were so small that my backpack didn’t fit under it, so I was holding it on my lap, realizing for the first time that I totally appreciate FAA guidelines in the U.S., even though they can seem frustrating at times.

On a flight from Maastricht in the Netherlands to Amsterdam a few years ago, I swore that if I made it back safely to land, I’d never fly again. Obviously, I made it back and promptly climbed on another plane a couple of hours later to take me home. But the flight left a lasting impression.

We left Maastricht on a very cold March morning in 2006. There was a horrid snow storm. I doubt if they would have let planes take off in that weather in the U.S. But we took off–a group of 10 international travelers just wanting to get home. The day was dark and snow swirled around the plane. This little puddle-jumper (aptly named a CityHopper) would roll and tumble, taking nose dives before climbing back up to a “cruising altitude.” The flight was not long, about 40 minutes, but I’m not sure anyone even dared breathe. There wasn’t a sound from any of the ten passengers, the young male flight attendant or the pilot. I closed my eyes, leaned my head back and prayed that I would be able to make it home to my family. I’ve since flown on dozens of small planes, but I will never forget that one trip that seemed to last an eternity.

I read a quote once that said something along the lines of travel is meant to make you uncomfortable and that you have to step outside your comfort zone to truly explore the world. I know for me that is absolutely the case. It’s moments like these, when things make me a little twitchy, make me think about where I am visiting and the people around, that I feel most alive. Yes, my travels are often an adventure and I wouldn’t have it any other way.

Finish off 2019 with more festivities. I recommend

I was simply overwhelmed - in a good way - when I